Though we were leaving the warm embrace of our friends’ hospitality and getting back on the road, my spirits were high on that Indiana morning. My adventurous side, enabled by a good night’s sleep, had completely taken over. 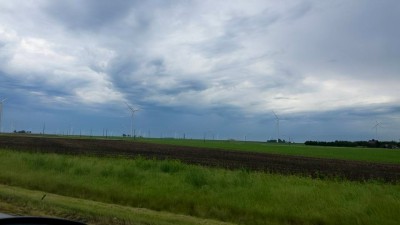 Wind farm off of I-65 in Indiana

If anything at all gave me anxiety that day, it was just how flat the prairie really is. After living my whole life in the shadow of mountains (or, at least, really high hills), I felt a bit like a sitting duck—even at 85 mph—driving across the flat expanse, like if some sky deity really wanted to blast my ass with a lightning bolt, well, I’d be an easier target, now. Silly, I know, but I need my mountains and it was going to be a while before we’d make it to the Black Hills.

This is not how they told me traveling with a cat would be! Thankfully.

Much to my disbelief, Salem was probably the most relaxed one in the car. When he wasn’t making friends with toll booth operators who were astounded at how well-behaved he was for being a cat harnessed in a car, he was curled up between us on the center console, fast asleep.

Having lived my life “east of the Mississippi,” crossing the mighty river was an undeniable checkpoint in our journey, which we made on I-90 crossing from Wisconsin to Minnesota. I almost missed it. I don’t know why I expected the river that far north to look like the pictures from Louisiana, but I did. My bad. Anyway, I offer you a very blurry picture of the Mighty Mississippi River from the road. 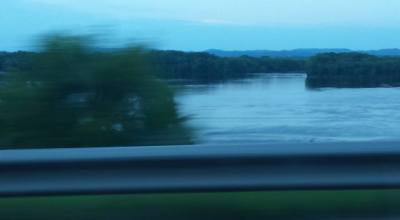 Travel weary, we stopped for the night in Worthington, Minnesota. I went to sleep wondering if, now that I was truly “Out West,” would I be like the people I knew who took an “Out West” vacation and came back obsessed with cowboys and western artifacts.

First of all, how can you argue with a place that has this kind of awesomeness hanging about?

Ignore the bug guts on the windshield.

Exactly. You can’t. I think that was our biggest WTF moment on the trip, but it turns out that South Dakota is full of awesome stuff. I mean, we knew about Badlands National Park and Mount Rushmore and the Crazy Horse Memorial, but we had no idea about things like the Corn Palace in Mitchell. Sadly, we didn’t have time to go in, but just check out these murals on the outside!

Too cool. For real.

We did not visit Wall Drug, which my bank account ended up being okay with. I knew there was no way I’d get out of there without buying a ton of stuff I didn’t need. See, my adventurous side came with her annoying little buddy, the impulse buy. The buddy who says, “When am I ever gonna be back this way again?” to rationalize stupid purchases at tourist traps when I’m supposed to be on a tight budget. Yeah. We skipped Wall Drug.

Instead, we had bison burgers at a much smaller pit stop and prepared to drive into a place I was very excited to see, Badlands National Park.