It all started when a former colleague posted this little gem on Facebook.

Now, if you’re like me, you’re appalled that anyone eats these at all. Marshmallow Peeps, in my view, are Easter’s version of candy corn. Nobody in their right mind eats them when there are still chocolates and Starbursts to be had. I commented that, for this reason, I’d never actually eaten a fresh peep so I couldn’t properly weigh in on the fresh vs. stale debate. I may have also called peeps an abomination that could have only come from Hell to begin with.

However, as this very serious—ly hilarious debate continued, I started to get curious. I voiced the curiosity, stating that I wondered how peeps would be in s’mores made with peanut butter eggs.

And so here we are. 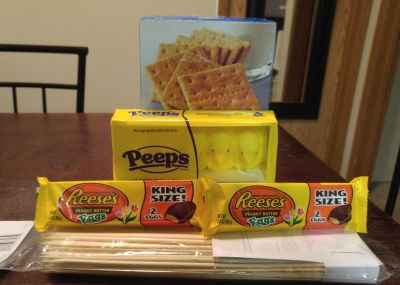 None of the companies represented have compensated me in any way. All opinions are my own.

In case any of my readers have never been around a campfire, the recipe for s’mores is simple: toasted marshmallow and a square of chocolate pressed between two graham crackers.

I’m lucky enough to have a working fireplace in my apartment, so the microwave method of “toasting” peeps was out. If I was going to eat one of those sugary little bastards, I was going to toast it over a real fire.

Back! Back to the fiery hell from whence ye came, sugar demon!

As I unwrapped the peanut butter egg that I knew was already delicious enough on its own, I seriously considered abandoning the whole s’mores idea and just eating the damned egg, but since it was only one of four, and I truly was curious, I continued on.

Yes, I cleaned my counter first.

I don’t have much of a sweet tooth; salty snacks are my jam. As curious as I was, I brought that gooey, diabetic nightmare of a mini sandwich to my lips in slow motion. My curiosity did not equate to a belief that I would like it. In fact, I was hoping to write a scathing review of this atrocity.

Instead, I need to go buy more peanut butter eggs so hubby and I can finish the remaining peeps. Seriously, that s’more was that good. It was the kind of good that must really be evil because nothing truly good is ever that enjoyable. 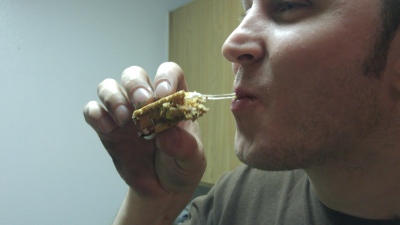 It’s safe to say that hubby also liked it.

Of course, now that I know I like Marshmallow Peeps enough to make s’mores with them, now that they’ve proven themselves a useful holiday candy, I almost feel bad about toasting their cute little sugar-butts.

See? I have a heart.