The alarm went off at 2 a.m. I groaned and considered snoozing, but the memory of the time I accidentally hit dismiss instead—and nearly missed a morning meeting as a result—poked through my half-awake haze. I untangled my legs from the sheets and forced my feet to the floor. The morning ahead was going to be far more enjoyable than attending a meeting.

We’d been saying for quite some time that we were going to make it to Sunrise, Mount Rainier National Park by sunrise to see the mountain in its morning glory and then get some hiking in before the heat of midday. It’s a bit of haul from our apartment to Sunrise, so we grabbed our cold brew coffee, made breakfast smoothies, and headed out the door and into the night.

The trip had been timed well and it’s not as though there’s a lot of traffic in the wee hours to muck things up. However, when we pulled over so I could go behind the little girls’ tree (damned cold brew coffee), I noticed the sapphire blue of pre-dawn begnning to glow on the horizon. We jumped back in the car and raced the sun…up switchbacks.

I wish I’d gotten a better view of the owl that swooped near the car and then changed course, retreating back into the woods. Sadly, it happened too fast to capture a picture. Relying on the split-second view and my memory to guide the research I’ve done since, I believe it was a northern barred owl.

We made it to Sunrise Point in plenty of time to capture this: 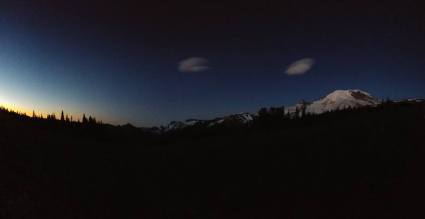 Mount Rainier faces the dawn. I love the line between the light and the darkness.

Mount Rainier on the near right; Mount Adams on the distant left. Lenticular clouds remind me of flying saucers.

and to watch the golden morning sun slowly illuminate the hills around Sunrise Lake:

The view of Sunrise Lake looked like it came straight out of a fairy tale.

I’d love to say that I had some quiet, spiritual sunrise moment, the mountain top glowing almost neon pink in the background, but Sunrise Point is a busy place at that hour and though the people were generally quiet as far as people go, I wasn’t attempting any morning meditation. Really, I didn’t want to. I wanted to get to the visitor center to see the trail options and to get an idea of the potential hike ahead.

I recognized the look on my husband’s face. I’d seen it before and had come to expect it. He’d been looking from the large trail map at the trailhead, to the wooden sign with arrows pointing the way to each trail just slightly beyond, to a rocky peak in the distance, and then back to the map to confirm. He repeated this a couple of times, and when he looked at me, the hopeful expression reaching his eyes, I sighed, “Let’s go to the peak,” and gestured to the trail ahead. He beamed.

I took a closer look at the map to see what I’d gotten my seriously-afraid-of-heights ass into this time. The peak in question was Dege Peak, and oh yes! Named the Sourdough Ridge Trail, the trail to the peak followed the ridge. The trail itself is rated moderate, but ridges often mean steep drop offs. I don’t always do so well with those.

Luckily, for most of the hike, I was far too distracted by the beauty of the subalpine meadows and wildflowers in full bloom (and by swatting the biting bugs that live amongst them) to think too much about falling off the side of the mountain. 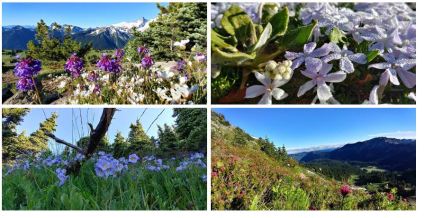 I have more shots of meadows and wildflowers than I’d like to admit. It wasn’t just my fear of heights slowing me down.

I’d been assured that the trail was a broad one, and it was. It’s likely even broader than I recall, as I’m well aware that fear influences perception. You know that camera effect in movies where a long hallway is stretched far longer and becomes much narrower? Yeah. That’s what happens to my perception on a trail with a drop off to even one side. The trail could be 5 feet wide, only a few paces bordering a drop, and those few paces would look, to me, like a mile on a tight rope.

And there I was, on the ridge, a steep drop-off on either side. My knees turned a little rubbery and I had to remind myself to breathe. I could turn back, I knew. My sympathetic husband turned around to tell me as much, but I was not turning around.  “Keep going,” I told him. “I got this; it’s just going to take me a minute.” I forced my perception into something closer to reality and pressed on. I’m glad I did.

Had those rocks been more comfortable, I might have stayed at 7,008 ft. for a bit longer.

I might have even been a little proud of myself for getting that much further in my fight against fear—or at least, fear of heights.

Descents are always a little tricky. I’m traveling in the direction gravity wants me to go: down. The issue is that I’d really rather not slip, slide, tumble, fall, or otherwise plunge to my death to get there. I was just starting to get comfortable, traveling at a good clip if I do say so myself, when I heard rocks start to fall down the side of the mountain. My first realization was that, thankfully, the falling rocks weren’t coming from me or anything I was doing, nor were they falling near me. Phew! The second realization was that I was in bear country; signs outside the visitor center made that clear. While I was fairly certain that it wasn’t a bear causing stones to roll, I turned to confirm. No bear. Phew, once more! I heard rocks again, this time at a lower altitude. My husband and I stopped and stood scanning the steep grade for the source of the disturbance. We couldn’t see a thing until the mountain goat flicked its ears and tail.

We both tried to get a picture, but the goat was too far off. We each zoomed in as far as we could on our respective phones/cameras, but the pictures were crap. We’d seen clearer images of Sasquatch! So, I decided to stick my phone back in my sports bra and enjoy the moment in mountain goat territory. As a Capricorn, I enjoyed a giggle.

We completed our descent without further incident (if you can call an almost-encounter with a mountain goat an incident), and spent the rest of the day scoping out places for new adventures.

One thought on “Sunrise at Sunrise”